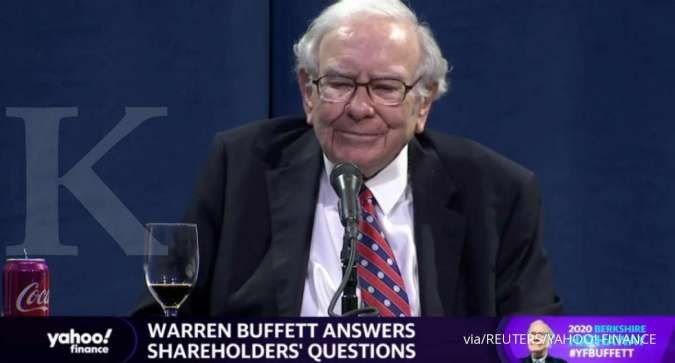 KONTAN.CO.ID - OMAHA, April 30 (Reuters) - Warren Buffett on Saturday used the annual meeting of Berkshire Hathaway Inc BRKa.N to reveal major new investments including a bigger stake in Activision Blizzard Inc, while also railing against Wall Street excess and addressing the risks to his conglomerate of inflation and nuclear war.

It allowed shareholders to ask five hours of questions directly to Buffett and Vice Chairman Charlie Munger, and some questions to Vice Chairmen Greg Abel, who would become chief executive if Buffett could not serve, and Ajit Jain.

Buffett had in his annual shareholder letter in February bemoaned the lack of investment opportunities.

That prompted a shareholder to ask what changed in March, when Berkshire bought 14.6% of Occidental Petroleum Corp and agreed to buy insurer Alleghany Corp for $11.6 billion.

Buffett said it was simple: he turned to Occidental after reading an analyst report, and to Alleghany after its chief executive, who once led Berkshire's General Re business, wrote to him.

"Markets do crazy things, and occasionally Berkshire gets a chance to do something," he said. "It's not because we're smart.... I think we're sane."

Berkshire spent $51 billion on equities in the quarter, and its cash stake sank more than $40 billion to $106 billion.

But the conglomerate has many cash-generating resources, including its insurance operations, and Buffett assured that reserves won't run dry.

"We will always have a lot of cash," he said. "It's like oxygen, it's there all the time but if it disappears for a few minutes, it's all over."

Buffett and Jain stumbled for answers when asked about whether the Ukraine conflict could degenerate into nuclear war.

Jain, who has drawn Buffett's praise for decades, said he had a "lack of ability" to estimate Berkshire's insurance exposure.

Buffett added that there was a "very, very, very low" risk of a nuclear attack, though the world had "come close" during the 1962 Cuban Missile Crisis.

"The world is flipping a coin every day," Buffett said. "Berkshire does not have an answer."

"That existed to an extraordinary degree in the last couple of years, encouraged by Wall Street," he said.

For his part, Munger, 98, echoed Nancy Reagan in criticizing bitcoin, saying that if an advisor suggested you put your retirement account there, "just say no." Munger also criticized trading firm Robinhood Markets Inc.

He and Buffett munched their familiar candies from See's, which Berkshire owns, and drank soda from Coca-Cola, a big Berkshire investment, at the meeting.

Abel defended Berkshire's BNSF railroad, saying there was "more to be done" to improve operations and customer service, and compete against rival Union Pacific Corp.

Buffett also said Berkshire is designed to assure shareholders that the company and its business culture will survive his and Munger's departures.

"Berkshire is built forever," he said.

Shareholders also rejected proposals requiring Berkshire to disclose more about how its businesses promote diversity and address climate risks, and install an independent chairman to replace Buffett in that role.

Buffett has run Berkshire since 1965, and Mario Gabelli, chairman of Gamco Advisors and a prominent Berkshire investor, opposed ending his chairmanship.

"It's not inappropriate for companies to look at separating the chair and CEO," he said. "It doesn't make sense in the case of Berkshire Hathaway because this guy has done a fantastic job for 50 years. We like the idea, but not here."

Thousands of people massed outside the downtown arena housing the meeting before doors opened at 7 a.m. (1200 GMT).

Berkshire had projected lower attendance than in 2019, and about 10% to 15% of seats in the normally-full arena were empty.

As at other Berkshire-sponsored events this weekend, nearly all attendees did not wear masks, though all needed proof of COVID-19 vaccination. CNBC.com webcast the meeting.

"I bought a chair from Walmart so I could sit down," said Tom Spain, founder of Henry Spain Investment Services in Market Harborough, England, who arrived at 3:15 a.m. for his third meeting. "Everyone has been using it. Next year I might bring a massive container of coffee and give it out."

Lauritz Fenselau, a 23-year-old owner of a software startup from Frankfurt, Germany, showed up at 4 a.m. for his first meeting. "It's like a pilgrimage," he said.

Also sleep-deprived was Andres Avila, who arrived in Omaha from Boston just five hours before getting in line at 4:45 a.m., carrying an umbrella to fend off the rain.