AstraZeneca COVID-19 vaccine to be shared across Europe, says France 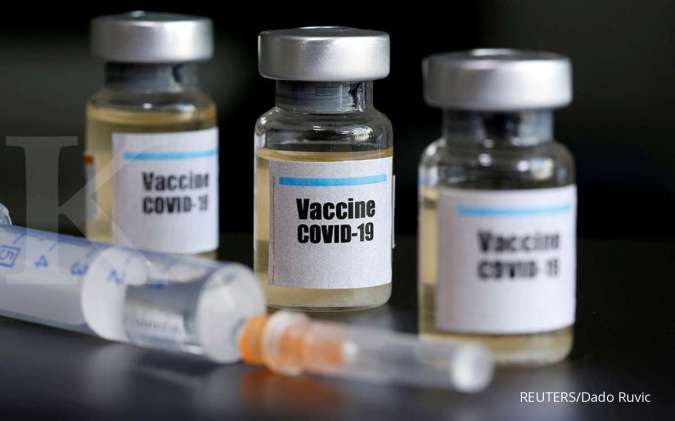 ILUSTRASI. Small bottles labeled with a 'Vaccine COVID-19' sticker and a medical syringe are seen in this illustration taken taken April 10, 2020. REUTERS/Dado Ruvic/Illustration

KONTAN.CO.ID - PARIS/BRUSSELS, June 15 (Reuters) - A deal between AstraZeneca and four European countries for COVID-19 vaccines involves doses being shared by European Union members on a pro rata basis based on population, a source at the French President's office said on Monday.

The British drugmaker signed a contract with France, Germany, Italy and the Netherlands at the weekend for up to 400 million doses of its potential vaccine.

Governments have been scrambling to secure advance purchases of promising coronavirus immunisation treatments amid concerns within the EU that the bloc has not moved as fast as other regions or countries.

"The principle of the deal is that the vaccines will be distributed pro rata, based on population," the French source said. "What we've asked for and what has been agreed is for production to take place in Europe."

The Netherlands also made clear on Monday that the vaccines would be available to all EU countries that sign up to the scheme after Belgium criticised the deal.

Belgian Health Minister Maggie De Block said the European Commission should be coordinating vaccine purchases to show solidarity and ensure no EU members were left behind.

Dutch Health Minister Hugo de Jonge said criticism of the deal was very odd because other EU member states would have access to the vaccines, which are still in clinical trials.

Diplomats said many smaller nations had called for a common EU approach to procurement at a meeting of health ministers on Friday, when the four countries discussed their plans.

Asked about how their deal would fit with an EU plan to invest about 2 billion euros ($2.3 billion) in buying promising vaccines, a Commission spokesman said the initiatives were connected and complimentary.

A call in May by French drugmaker Sanofi for a more collaborative European effort in the hunt for a vaccine sparked a backlash, especially after its CEO said doses produced in the United States, which had rapidly rolled out funding for research, would go to U.S. patients first.

Sanofi Chief Executive Paul Hudson later tempered his comments, emphasising that any coronavirus vaccine would reach all parts of the world.

Macron is due to visit a Sanofi Pasteur vaccine plant in France on Tuesday and will announce commitments on treatments and manufacturing capacities alongside the company, the source at the President's office said. ($1 = 0.8886 euros)

(Reporting by Michel Rose and Matthias Blamont in Paris, Philip Blenkinsop and Francesco Guarascio in Brussels and Anthony Deutsch in Amsterdam; Writing by Sarah White; Editing by David Goodman and David Clarke)