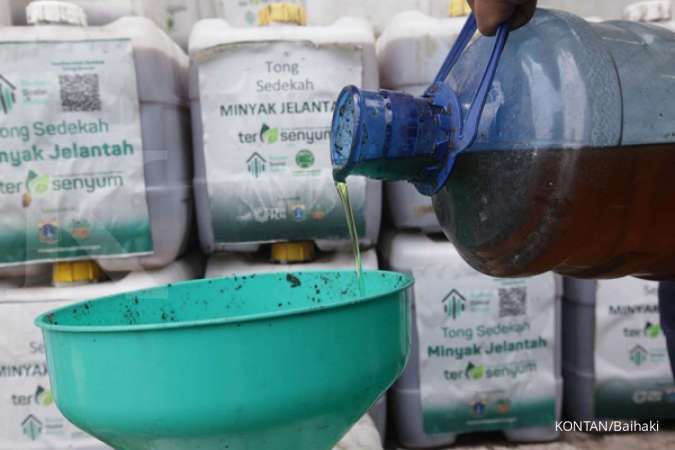 ILUSTRASI. A man collects used cooking oil to be sent to a biodiesel manufacturing plant at a training facility in Depok, West Java (20/10/2021). KONTAN/Baihaki/

KONTAN.CO.ID - JAKARTA. Indonesia has raised its 2022 biodiesel allocation to 11.03 million kilolitres amid expectations of rising demand in the fourth quarter while it extends an export levy waiver to maintain price stability, a senior minister said on Monday.

The allocation of biodiesel, which is made from palm oil in Indonesia, will be increased from 10.15 million kilolitres, Coordinating Minister for Economic Affairs, Airlangga Hartarto, said in a statement.

Indonesia has a mandatory B30 programme, where 30% of the fuel is palm-oil based, and post-pandemic economic recovery is boosting demand for the fuel, he said.

"The extension of $0 levy is intended to maintain the current momentum, where the price of crude palm oil is starting to stabilise, the price of cooking oil starts to fall, and the price of fresh fruit bunches begins to rise," he said.

The world's top palm oil exporter has waived palm oil export levy since mid-July to encourage export of the edible oil amid a build-up of domestic stock caused by an export ban in May that was imposed to control cooking oil prices. The finance ministry regulation detailing the levy waiver extension has not yet been made public,