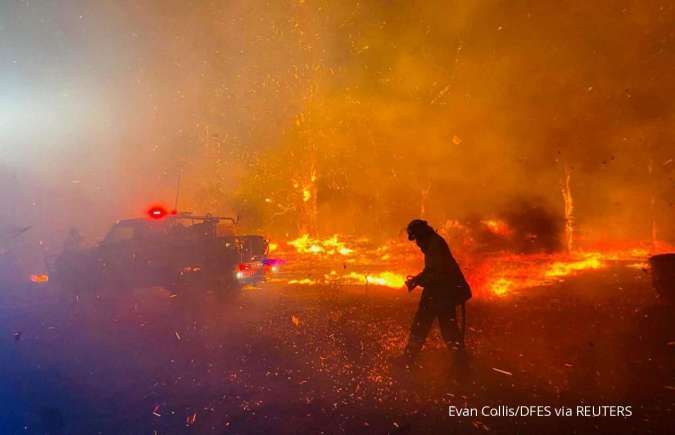 ILUSTRASI. A firefighter walks with a hose as a bushfire continues to burn in Hester, Western Australia, Australia February 5, 2022. DFES/Evan Collis/Handout via REUTERS

KONTAN.CO.ID - NUSA DUA, Indonesia, Aug 31 (Reuters) - Senior officials from the Group of 20 major (G20) economies met for climate talks on the resort island of Bali on Wednesday, with host Indonesia warning that failure to work together to cut emissions would push the planet toward "unchartered territory".

Indonesia's Environment Minister Siti Nurbaya Bakar said countries must jointly arrest global warming or see the planet pushed to a point "where no future will be sustainable".

"It is our responsibility to the be part of the solution. We build bridges, not walls," she said.

The G20 climate meeting comes as extreme weather events - fires, floods and heatwaves - pummel several parts of the world, including unprecedented flooding in Pakistan in recent weeks that has killed at least 1,000 people.

Scientists say most such extreme weather events are attributable to human-caused climate change and will only increase in severity and frequency as the globe edges closer to the warming threshold of 1.5 degrees Celsius above pre-industrial levels.

Environment officials from Australia, Brazil, India, Japan, South Korea, and U.S. Special Presidential Envoy for Climate John Kerry are attending the talks in Bali, and are expected to produce a joint communique later on Wednesday.

Indonesia as current G20 chair has invited representatives from the African Union to join the talks for the first time, said Siti, adding that voices from all countries, regardless of their wealth and size, must be heard.

Also in attendence is Alok Sharma, president of last year's 26th United Nations Climate Change Conference (COP26), who said the war in Ukraine had increased the urgency of a shift to renewable sources of energy. The COP27 climate summit will be held in Egypt this November.

"The current energy crisis has demonstrated the vulnerability of countries relying on fossil fuels controlled by hostile actors," he said in a statement on Tuesday.

"Climate security has become synonymous with energy security and the chronic threat of climate change is not going away," he said.