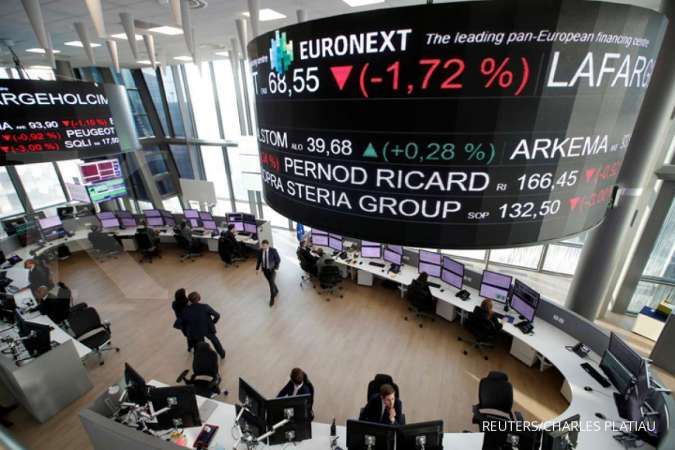 KONTAN.CO.ID - LONDON (Reuters). A recovery in world stocks faltered on Monday as the threat of rising coronavirus infections in parts of Europe and the United States curbed risk appetite, boosting demand for safe-haven gold.

European stocks fell 0.3% at the open after Germany’s coronavirus reproduction rate rose over the weekend to 2.88 on Sunday from 1.06 on Friday, health authorities said.

Baca Juga: Indonesia warns unemployment to spike due to pandemic

The rise, mainly driven by outbreaks in meat processing plants, brings with it the possibility of renewed restrictions on activity, a move that could end any economic rebound.

“I regard the German R statistic as a bit of a red herring or more of a statistical quirk,” said Chris Bailey, Raymond James European strategist.

“Coronavirus at-the-margin remains an overhang but the opening up of Europe still looks on much more solid foundations than the US/Americas.”

U.S. stock futures were up 0.8%, continuing to shrug off a spike in infections. In Asia, Japan's Nikkei .N225 fell 0.2% and MSCI's broadest index of Asia-Pacific shares outside Japan was almost flat.

In further evidence that United States was far from returning to normal, Apple (AAPL.O) said on Friday that it would temporarily shut 11 U.S. stores as coronavirus cases rose in some states.

Record stimulus measures to counter the economic impact of the coronavirus pandemic will leave advanced economies with much higher debt than the accumulated during the 2008/09 financial crisis, Moody’s estimated in a report.

“Government debt/GDP ratios will rise by around 19 percentage points, nearly twice as much as in 2009 during the GFC ... the rise in debt burdens will be more immediate and pervasive, reflecting the acuteness and breadth of the shock posed by the coronavirus.” Moody’s said.

The pandemic is accelerating globally with the World Health Organization reporting a record increase in global coronavirus cases on Sunday.

“Whether there will be a lockdown may vary depending on region. It will be a tough decision for politicians. But they probably have no other choice if they are running out of hospital beds,” he said.

Torn between record stimulus and growing fears of second- wave infections, stocks have been moving sideways in recent weeks. They had risen more than 40% from March lows on hopes the worst of the pandemic was over.

Global stock market valuations are now at their highest since 2002 compared with projected earnings in the coming 12 months.

Investors are also wary of developments in Hong Kong after details of a new security law for the territory showed Beijing will have overarching powers on its enforcement.

China’s top legislative body, the National People’s Congress Standing Committee, will meet on June 28, and the Global Times reported it was likely to enact the Hong Kong security law by July 1.

Major currencies were mostly steady. The euro traded at $1.1205 EUR=, near its lowest in nearly three weeks.