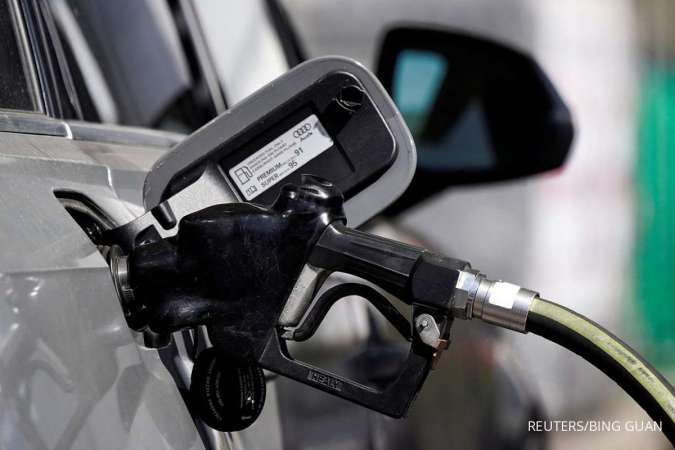 ILUSTRASI. A gas pump is inserted inside an Audi vehicle at a Mobil gas station in Beverly Boulevard in West Hollywood, California, U.S., March 10, 2022. REUTERS/Bing Guan

KONTAN.CO.ID - LONDON. Oil prices slipped on Monday alongside equities and weighed down by a strong dollar and demand concerns on the back of continued coronavirus lockdowns in China, the world top oil importer.

Global financial markets have been spooked by concerns over interest rate hikes and recession worries as tighter and wider COVID-19 lockdowns in China led to slower export growth in the world's No. 2 economy in April.

In Russia, oil output rose in early May from April and production has stabilised, Deputy Prime Minister Alexander Novak was cited as saying, after output fell in April in the wake of Western sanctions imposed over the Ukraine crisis.

Crude imports by China fell 4.8% in the first four months compared with last year, but included a nearly 7% rise in April.

On the supply side, Saudi Arabia, world's top oil exporter, lowered crude prices for Asia and Europe for June.

Last week, the European Commission proposed a phased embargo on Russian oil, boosting Brent and WTI prices for the second straight week. However, the proposal requires a unanimous vote among EU members this week, which has yet to transpire.

The EU proposal was followed by a pledge by G7 nations on Sunday to ban or phase out Russian oil imports. Washington also imposed new sanctions.

Japan, part of G7 and one of the world's top five crude importers, will ban Russian crude imports "in principle", Prime Minister Fumio Kishida said, adding this would take time.