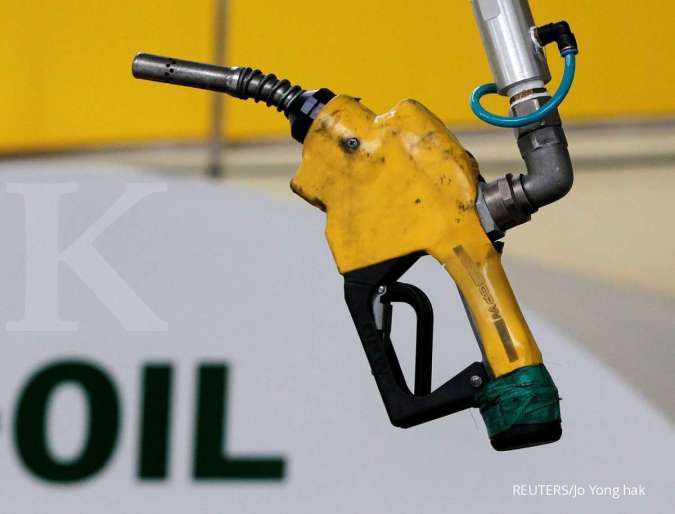 ILUSTRASI. FILE PHOTO: A gas pump is seen hanging from the ceiling at a petrol station in Seoul June 27, 2011. REUTERS/Jo Yong-Hak/File Photo

Prices fell after China released data on Saturday showing that factory activity in the world's second-largest economy contracted for a second month to its lowest since February 2020 because of COVID lockdowns.

"A slowing to that extent, when China is already suffering from a property bust and worries about its (until recently) increased regulation, is potentially a major issue for commodity markets and the world economy," said Tobin Gorey, a Commonwealth Bank commodities analyst, in a note.

On the supply side, Libya's National Oil Corp (NOC) said on Sunday it would temporarily resume operations at the Zueitina oil terminal to reduce stockpiles in storage tanks to avert an "imminent environmental disaster" at the port.

NOC in late April declared force majeure on some shipments at Zueitina as political protesters forced a number of oil facilities to suspend operations.

Limiting the down side for oil prices is a possible dent in supply with the European Union leaning towards banning imports of Russian oil by the end of the year, two EU diplomats said after talks between the European Commission and EU member states on the weekend.

Around half of Russia's 4.7 million barrels per day (bpd) of crude exports go to the EU, supplying about one-fourth of the EU's oil imports in 2020.

While Western countries have curbed buying Russian oil as sanctions have hit shipping and insurance for the country's exports, the impact on global supply has been cushioned as India has been picking up lower priced Russian cargoes.

Royal Bank of Canada analysts estimated India's crude imports from Russia have grown from less than 100,000 bpd in 2021 to 800,000 bpd in April and expect India to continue ramping up imports as long as Washington does not impose secondary sanctions.

Reuters reported on Friday that Indian refiners are negotiating a six-month oil deal with Russia to import millions of barrels per month.