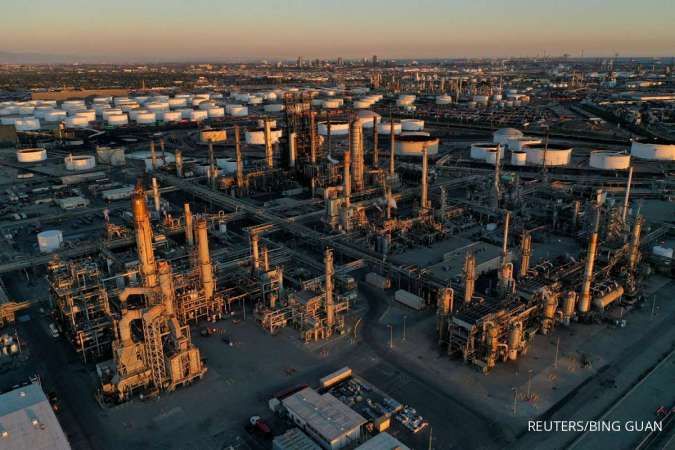 KONTAN.CO.ID - LONDON, April 22 (Reuters) - Oil slipped on Friday, burdened by the prospect of weaker global growth, higher interest rate and COVID-19 lockdowns in China hurting demand even as the European Union considered a ban on Russian oil that would further tighten supply.

The International Monetary Fund this week cut its global economic growth forecast while the U.S. Federal Reserve Chair on Thursday said that a half-point increase to interest rates "will be on the table" at the next Fed policy meeting in May.

"At this stage, fears over China's growth and overtightening by the Fed, capping U.S. growth, seem to be balancing out concerns that Europe will soon widen sanctions on Russian energy imports," said Jeffrey Halley, analyst at brokerage OANDA.

The outlook for demand in China, the world's biggest oil importer, continues to weigh. Shanghai announced a new round of measures including daily coronavirus testing from Friday, adding to strict measures to curb the latest outbreaks.

Brent hit $139 a barrel last month, its highest since 2008, but both oil benchmarks were heading for weekly declines of more than 3% this week.

Ongoing support is provided by supply tightness after disruptions in Libya, which is losing 550,000 barrels per day (bpd) of output, and supply could be squeezed further if the European Union imposes an embargo on Russian oil.

An EU source told Reuters this week the European Commission is working to speed up availability of alternative energy supplies to try to cut the cost of banning Russian oil and persuade reluctant nations to accept the measure.

"An EU boycott of Russian energy would inevitably lead to higher energy prices, at least in the immediate term," said Stephen Brennock of oil broker PVM. "It looks to be a case of if, not when."